Insurance is one of the oldest modern industries. Most policies sold today are still based on concepts of coverage and pricing invented centuries ago, by early insurance companies in England and continental Europe. Now the industry is being re-invented—and much of the action can be found among new insurtech companies in China and Southeast Asia. Article Source: Forbes.

Insurtech is the use of digital technology to cut costs and enhance processes for both new and existing types of insurance. A recent Forbes Tech Council report summed up its potential: “Imagine getting a policy that is custom-tailored to your exact needs, lets you start and stop coverage on demand, makes you pay only for the coverage you use, and can be underwritten within seconds on your smartphone.”

That vision is fast becoming reality. And okay, maybe you don’t need “over-drinking” insurance while you watch this year’s FIFA World Cup on TV. (For the last World Cup, in 2014, Chinese insurtech firm Zhongan offered such a medical policy to hyped-up fans who risked acute alcohol poisoning.) But in places from Indonesia to the Asian mainland, there are many occasions when a few taps on a touchscreen will buy eminently practical coverage.

Travel insurance that covers a range of mishaps—including delays, injury, and lost or stolen property—is now widely popular. You can get low-cost, one-time policies in a flash at ATMs or via your phone. Ongoing forms of coverage such as general health insurance and auto insurance are being streamlined and personalized, too.

Insurtech upstarts like CXA, PasarPolis, and Vouch are doing exciting work. And the activity is remarkable, given that insurtech came relatively late to Asia.

Where is the growth coming from?

Most tech-based insurance ventures to date have been in the U.S., where 729 related investments were made since 2013 versus just 92 in all of Asia. But insurtech deal flow is ramping up worldwide—Q1 of this year was the busiest quarter yet—with China and SEA countries taking an increasing share. 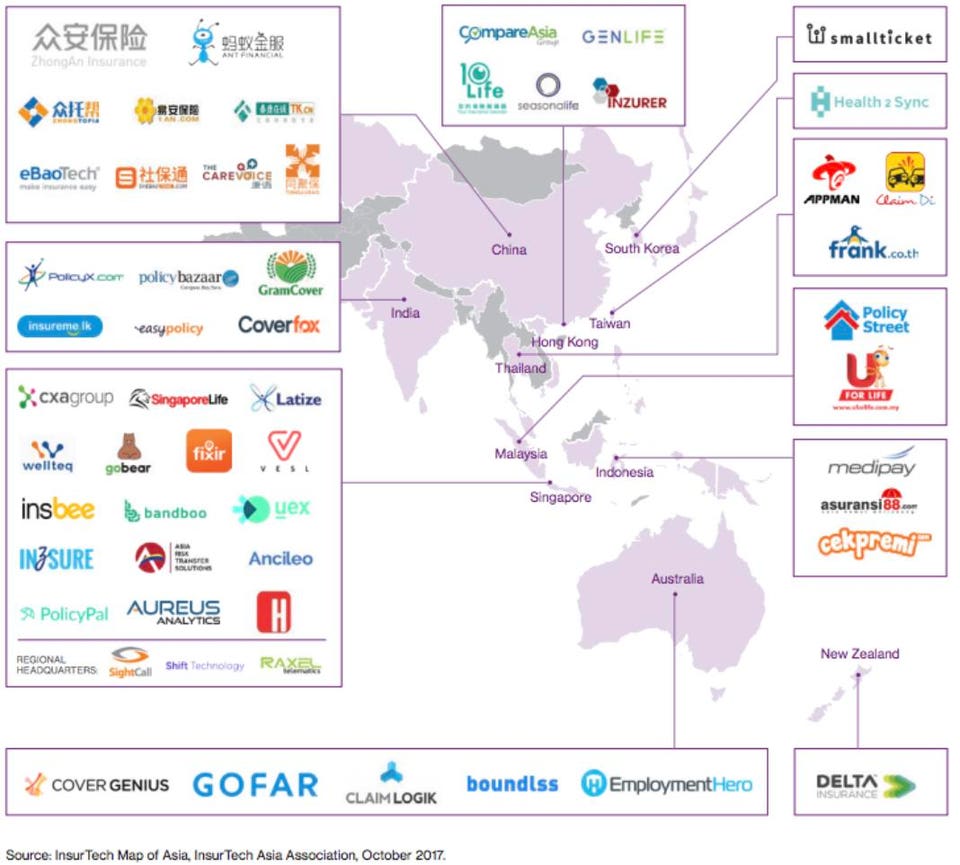 Several factors account for this. Insurance penetration is low compared to the West, which means room for growth, whereas e-commerce penetration is higher than in countries like the U.S. People in China and SEA are more inclined to shop online, so they are open to buying insurance that way—and they’re not locked into “legacy” insurance products from big, old, offline firms to the extent that most Westerners are. Insurtech companies are freer to set new standards for how insurance is packaged and sold, in the same sense that it’s easier to build a new state-of-the-art subway system than to upgrade New York City lines built in the early 1900s.

One final factor is that many Chinese and SEA customers can’t afford gold-plated insurance. They are moderate-income urban residents or low-earning farmers. This constraint drives innovation, as insurers must offer cost-effective microinsurance—policies with very low premiums, which nonetheless pay out enough to cover losses that customers incur—and/or on-demand insurance, which customers can buy selectively for specific needs.

All factors thus conspire to create surging insurtech markets. Shanghai-based Zhongan no longer sells drunk-football-watching insurance, but does sell a host of specialty policies through partnerships with over 1,000 online merchants and marketplaces. Sharing-economy hosts can buy Zhongan’s b-and-b insurance for the risks of having strangers as guests. Any product sold online can have damage or theft insurance “bolted on” to the sale, and some cross-sells are not so obvious: Parents buying school supplies for children may be offered a policy to insure the kids against school-related accidents.

Often, they collaborate with them. Indonesian startup PasarPolis sells a variety of travel, property, life, and other insurance. The policies are underwritten by big companies such as Paris-based AXA, Swiss firm Zurich, and U.K.-based Chubb. PasarPolis, according to founder Cleosent Randing, provides the “technology services layer.”

The “layer” includes much more than an online user interface, Randing explains: “We build the connective ecosystem and invest in innovation around data science on risk pricing.” This allows real-time dynamic underwriting based on ever-changing data. The technology optimizes fraud detection, automates claim processing, and enables the creation of new insurance products, he says, with the ultimate goal that in Indonesia–with a fast-growing population of 266 million–“the underinsured can benefit from the development of insurtech.”

Though Randing’s firm is still in its early years, it has a nice lineup of home-grown Indonesian partners. PasarPolis insures motorbike drivers for the ride-hailing unicorn Go-Jek, at rates that can be adjusted to each driver’s working frequency and customer rating, while tie-ins with Indonesia’s largest online mall and travel site are brewing. The company thus aims to be a digital bridge between established global insurers and a fast-moving country on the rise.

Singapore’s Vouch Insurtech sells auto insurance from Japan’s two largest insurers plus a local cooperative. The value proposition is a no-claim rebate (NCR) model. Vouch’s customers can form risk pools with their (ideally) safe-driving friends and relatives, and if no or few claims are filed during a year, pool members get annual rebates up to 15% of the premiums they paid.

Meanwhile, Singapore-based CXA is making waves throughout Asia. In many Asian markets, health insurance comes primarily through employer-funded plans. And CXA—with an online brokerage platform for employers of all sizes—is out to save everybody’s money and health.

CEO Rosaline Chow Koo says her company’s approach can “leverage AI technology to combat chronic disease in Asia.” Koo notes that diabetes, for instance, affects more people at earlier ages in Asia than in the West, “leading to annual healthcare costs escalating at a much faster rate than corporate revenues or compensation.” Solution: shift the focus to wellness and prevention.

Employers using the CXA platform give each employee a healthcare “wallet” to spend. Then, Koo says, “CXA’s AI engine uses data from each employee … to educate [them] on their health risks and to recommend relevant interventions,” while “employers get aggregated, anonymized real-time analytics” to help refine overall spending. It’s all done digitally, of course. Employees can file claims with a mobile app and track them as they would a shipping package. Koo hopes that low overhead costs and ease of use will bring many more SMEs aboard.

Why is Asia the place to be for these insurtech companies?

Much of what’s being tried in China and Southeast Asia is not brand-new. Vouch’s peer-group NCR model, for example, was pioneered by the German insurtech Friendsurance in 2010. But innovations are likely to spread fast across Asia—for reasons already mentioned, plus the fact that major tech firms are joining the game.

China’s Tencent, owner of the popular WeChat social-networking app, has multiple insurtech plays in progress. Tencent co-invested (with Alibaba and financial giant Ping An) to launch Zhongan; is now majority owner of a new insurance company, Weimin; and has the existing WeSure platform on WeChat where other insurers can sell.

Bottom line: anyone looking for the future of insurance should look to Asia. Although some trends will unfold differently than in the West, it’s the new frontier of insurtech.

You have successfully subscribed!